Dogs & Antifreeze: Should I Go to the Pet ER? 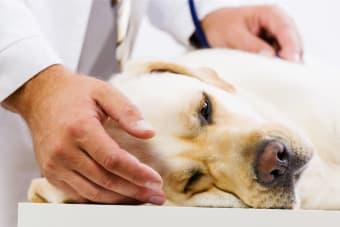 Antifreeze is a common hazard for dogs and can cause fatal damage to their system, even if only a small amount is ingested. Today, our Milledgeville vets describe symptoms of antifreeze poisoning, and what you should do if your dog has consumed some.

Tragically, many pets die each year from antifreeze poisoning - a common hazard for dogs. It can happen as easily as your dog licking a few drops of this from your driveway after it has dripped from your car.

The lethal chemical in antifreeze is ethylene glycol, and dogs can consume a lot of it before its aftertaste starts to take effect. But by then, it’s too late; it only takes less than three ounces (or 88 ml) of this liquid to poison a medium-sized dog and cause fatal damage to their system, including the kidneys, brain, and liver.

Ethylene glycol is also used in hydraulic brake fluids. Sometimes, homeowners will add antifreeze to their toilet bowls to protect their pipes for the winter, so beware of this if you are visiting other homes with your pet.

Here are some common symptoms of antifreeze poisoning in dogs:

If your dog has antifreeze poisoning, you will need to bring your pet in for a physical exam. Your vet will ask about which symptoms you’ve been noticing and how the poisoning may have happened.

We will use diagnostic testing to analyze their stool or vomit if possible, and complete urinalysis and chemical blood profile. These tests can help the veterinarian to diagnose the poisoning and expedite treatment. This treatment will be based on your dog’s medical history as recounted to the vet, so you will need to be as thorough here as possible.

Because antifreeze poisoning can easily be fatal, immediate first aid needs to be administered extremely carefully. Only induce vomiting if you are positive your dog has ingested antifreeze. We recommend calling your veterinarian before inducing vomiting since this can be dangerous in some instances of poisoning as the esophagus can be seriously damaged by some substances.

A simple hydrogen peroxide solution can be used to do this - only if the poisoning has occurred in the previous two hours. Give one teaspoon for every five pounds of body weight, with a maximum of three teaspoons at one time. The teaspoons should be spaced 10 minutes apart.

If your dog has already vomited, do not try to induce more vomiting. If vomiting does not occur after your dog has had three doses of hydrogen peroxide, seek emergency veterinary care.

Vomiting should also not be induced if your dog is having problems breathing, is in serious shock or distress, or is unconscious. Also, whether he vomits or not, your dog must be immediately rushed to your vet, who can safely administer antidotes.

Antidotes may include activated charcoal, which will stop further absorption of ethylene glycol. 4-methyl pyrazole can also be used to effectively treat antifreeze poisoning if given quickly enough after your dog has ingested it. There is still a possibility of kidney failure, so your dog may need to be in intensive care.

Dogs who have consumed antifreeze in very small amounts may survive but will develop kidney failure within days of ingestion. Kidney damage kills many dogs who have been poisoned by antifreeze.

While antifreeze can do devastating damage to your dog’s system, poisoning is preventable. Here are some steps to take today:

Is your dog showing signs of antifreeze poisoning? Contact our Milledgeville vets to get your pup back on their feet.

We Are Welcoming New Patients!

Heart of Georgia Animal Care is now accepting new patients! Our vets are passionate about caring for cats and dogs in Milledgeville and surrounding areas. Contact us to book your pet's first appointment.